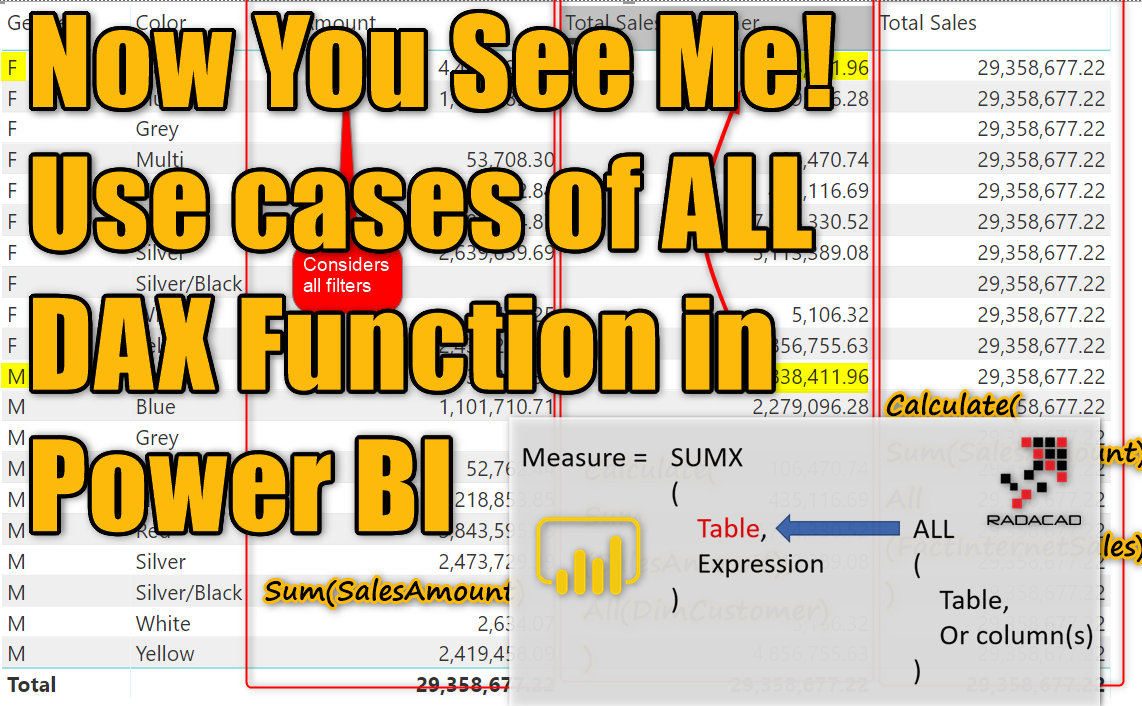 Among all the functions in DAX; the behavior of ALL function still seems mysterious for many. Many people, don’t use it at all and end up writing a very complicated calculation for a scenario that only one simple expression can do the same job. Some people, use it, but don’t exactly know how the function works, and get some unexpected results, and call it an error. In this article, I’m going to explain what ALL function is, how it can be used, and what are use cases of using such a function in DAX and Power BI. If you like to learn more about Power BI, read the Power BI book from Rookie to Rock Star.

The dataset for this model is the AdventureWorksDW2012 Excel file, which you can download from here. Tables used in this example, are DimCustomer, DimProduct, FactInternetSales.

What is the ALL() Function in DAX?

To understand the behavior of ALL function, nothing is better than an example, let’s see how it works in action; I’ve created a Measure using ALL function. ALL function accepts a table as input, and

The output of ALL function is a TABLE, and you cannot use it in a measure. as you can see in below screenshot; if I create a measure with ALL, then I get an error saying; The expression refers to multiple columns. Multiple columns cannot be converted to a scalar value.

As the output of ALL function is a table, then you have only two ways to use it in DAX:

Using ALL directly in Calculated Table

As the output of ALL function is a table, then it can be used directly in creating a calculated table. For example, All used with a table name will be an exact copy of that table. 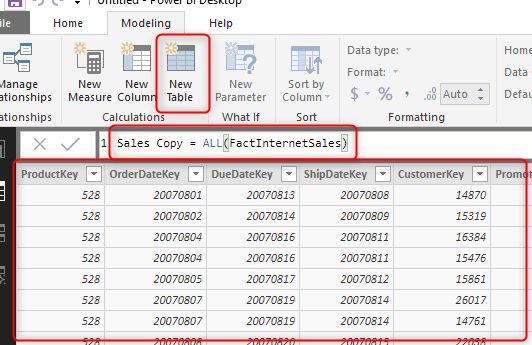 Or, if you use all with only one or more columns, then you get a table with a distinct combination of those column values;

ALL(FactInternetSales[SalesAmount]) will return only 42 rows, which is the distinct values in the SalesAmount Column, 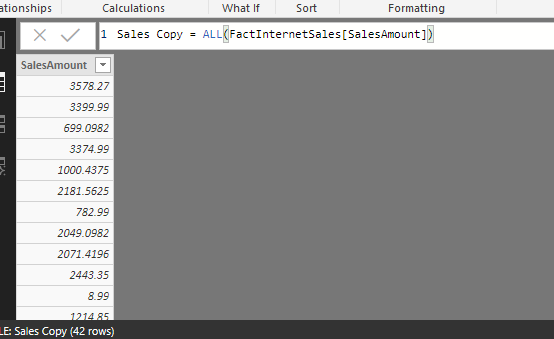 However, If ALL used with a combination of columns. Such as three columns below, then the combination would be distinct;

Using ALL function in the Calculated table, give us one of the most common use cases for ALL function:

You can create role-playing dimensions, which are copies of an existing dimension (such as Date dimension). I have written about this scenario in my article here. 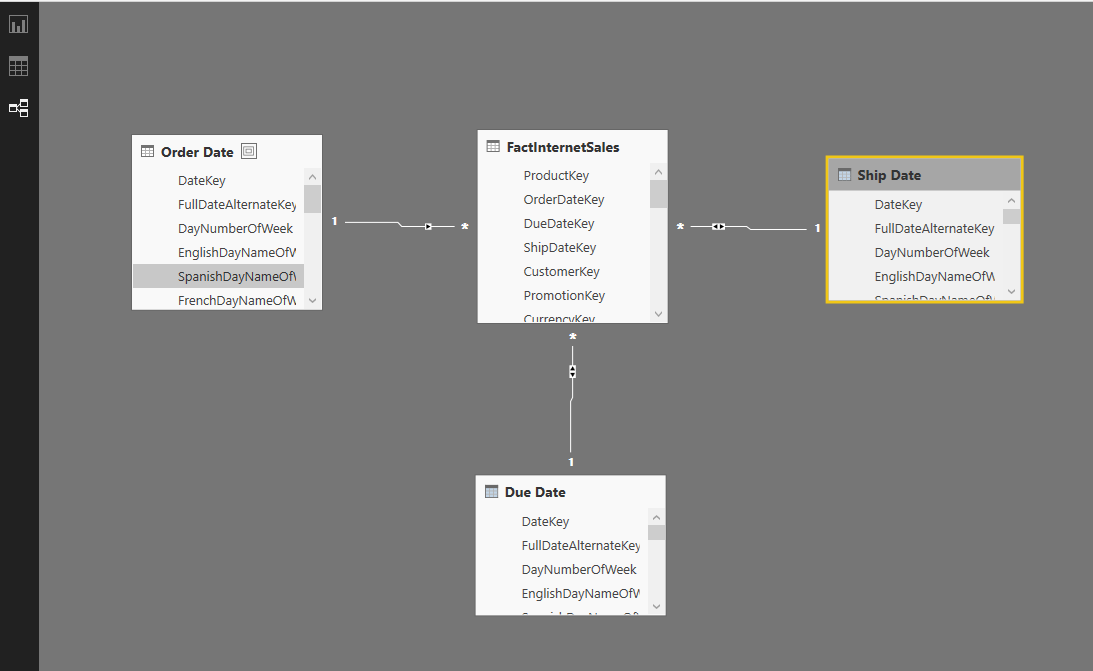 Using ALL as an Input for Other DAX functions

If ALL cannot be used directly in a Measure, then no dramas. It can be used as an input parameter for other functions. In DAX, there are many functions which accept a table as input. All those functions can accept ALL as their input parameters. For example, SUMX is a function that one of its parameters is a table; in our case; this can be a table generated by ALL as a function.

As an example, this is one sample usage of ALL and SUMX: 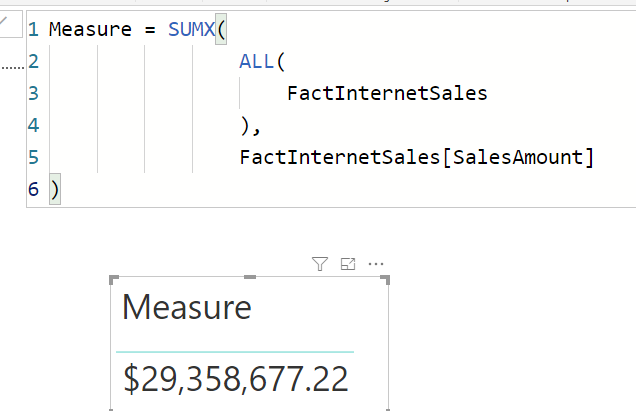 SUMX is just one of the DAX functions, that accepts a table as an input parameter. there are many other functions such as Calculate and many other functions in the same category. Combination of ALL with other functions and using that in DAX measures are the most common methods of using this function. but before going further, let’s explain something very important about ALL function.

ALL Ignores the Filter

In addition to returning a table as the output, ALL will also ignore any filter(s) applied on it. What does that mean? it means if you have a visualization which is filtered by something, then ALL won’t care! It will just act like there is no filter there. Here is an example: 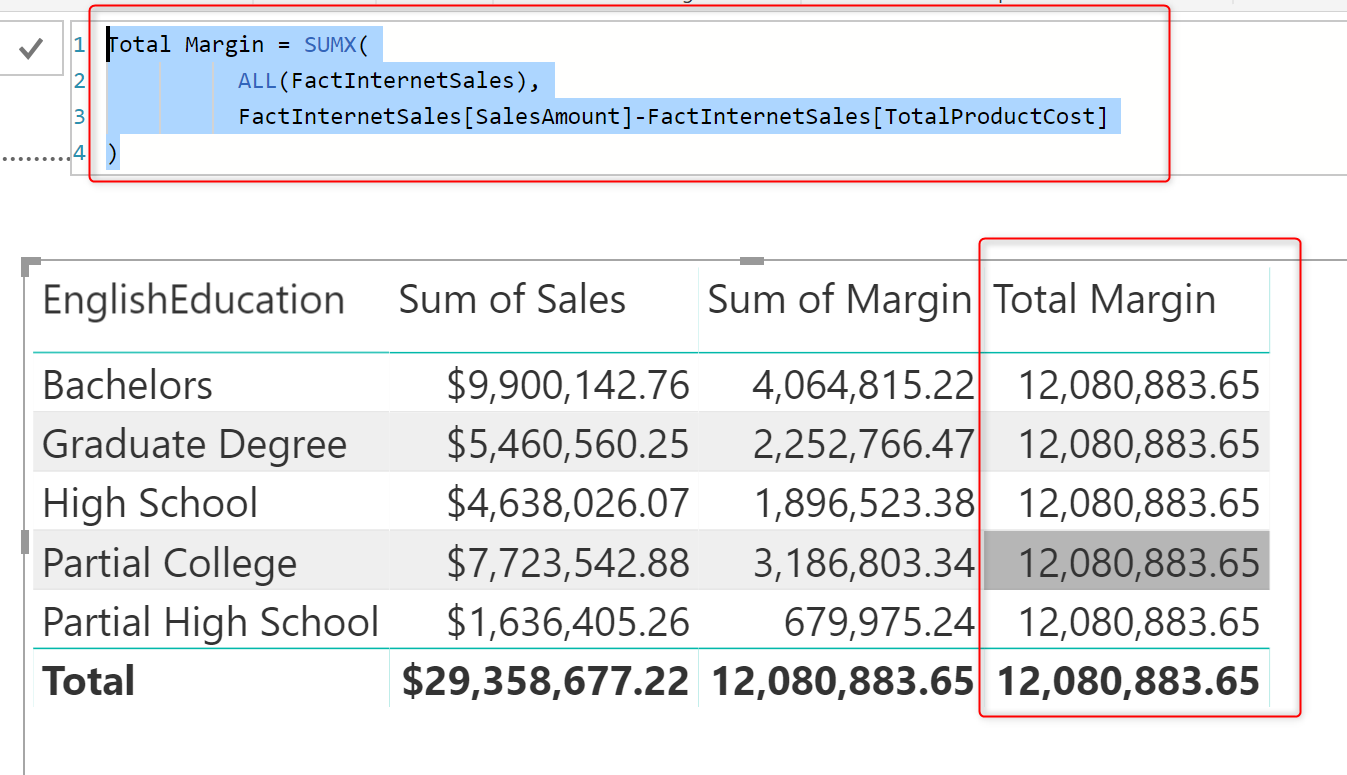 Sum of Margin expression is as below:

and Total Margin expression is as below:

As you can see, the only difference is the usage of ALL in the Total Margin expression. The output value is also different. The total Margin in each row is exactly the same value; $12,080,883.65 like the margin is never filtered by Education, or let’s say like ALL function ignores the filter applied. 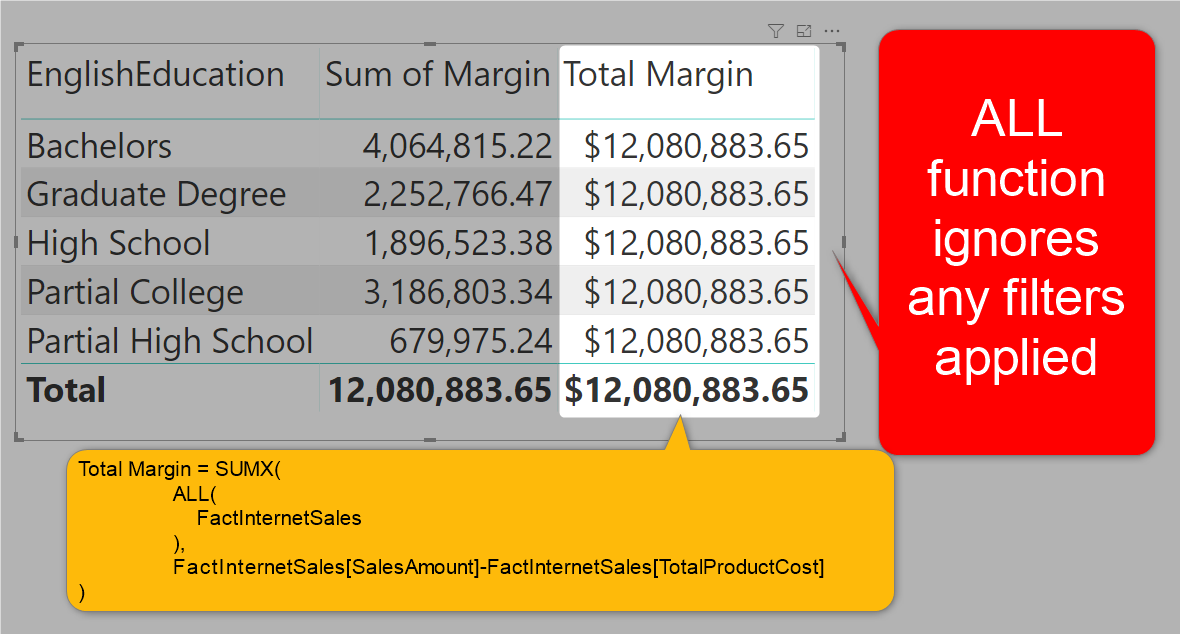 Common Use Case for ALL: Calculating Percentage

One of the most common use cases for using ALL is calculating the percentage of a measure. The trick is to do the calculation of that measure once without ALL, and once with ALL, and then divide one by the other! Now just for an instant, think how would you do this calculation if there was no ALL function? how would you find out the total margin, when the margin is already filtered by Education category? This is the power of ALL as a function to give you such a combination.

Use Case for ALL function: Controlling the Interaction

I have written previously about a method in DAX that you can control the interaction between visuals. Let’s say with the selection of an item in the slicer, you don’t want the values in a specific measure in table visual to change. Well, now that you know about ALL; it seems possible how to do it. 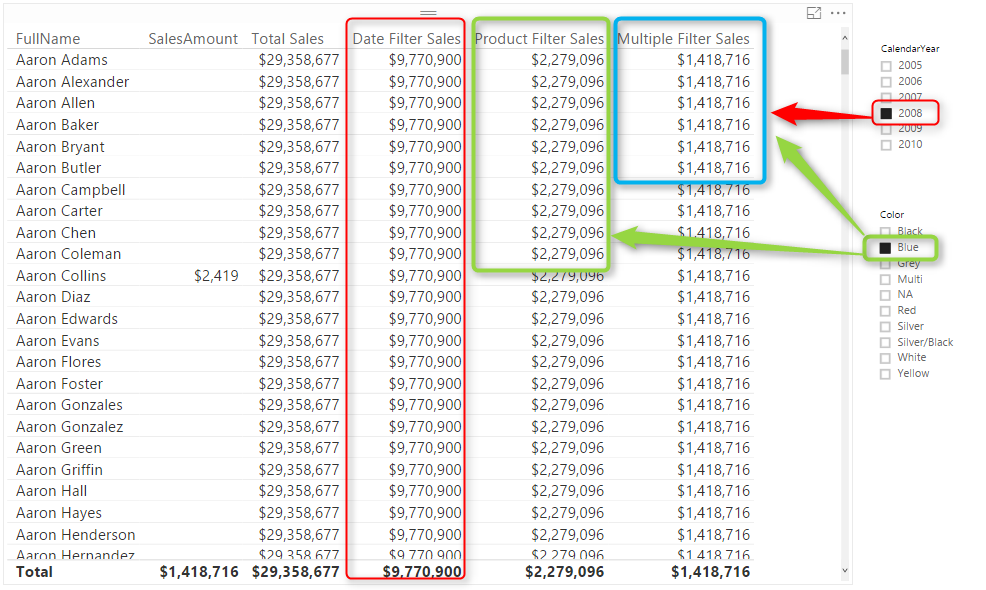 Here is the script for the Date Filter Sales Measure for example:

As you can see, an ALL function been used, however, because there is another filter in Calculate (DatesBetween), the expression is now going to consider the intersection between these two filters. As a result, in this case, ALL will ignores any filters coming from any other tables except the DimDate. To read more about examples like that, read my article here.

The Table which ALL is applied to is Important

However, if I am interested to achieve the total sales of all customers, but then allow all other filters to pass, I can write: 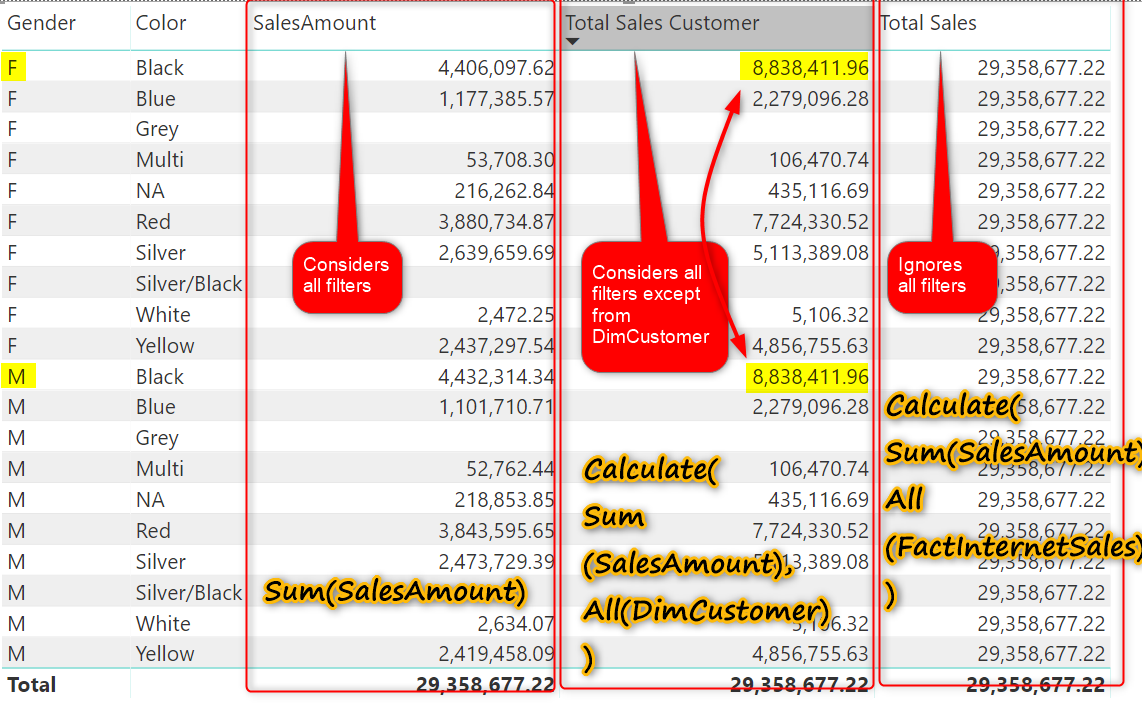 The ALLExcept Function: An Extension

Sometimes you want to ignore the filter coming from all columns in the table, except for one or more columns. Using ALLExcept is a good option for such scenarios. Let’s say that We want the filter from Gender to pass through, but the filter from all other columns to be ignored. We can write an expression using ALLExcept, and use the Gender in it as below; 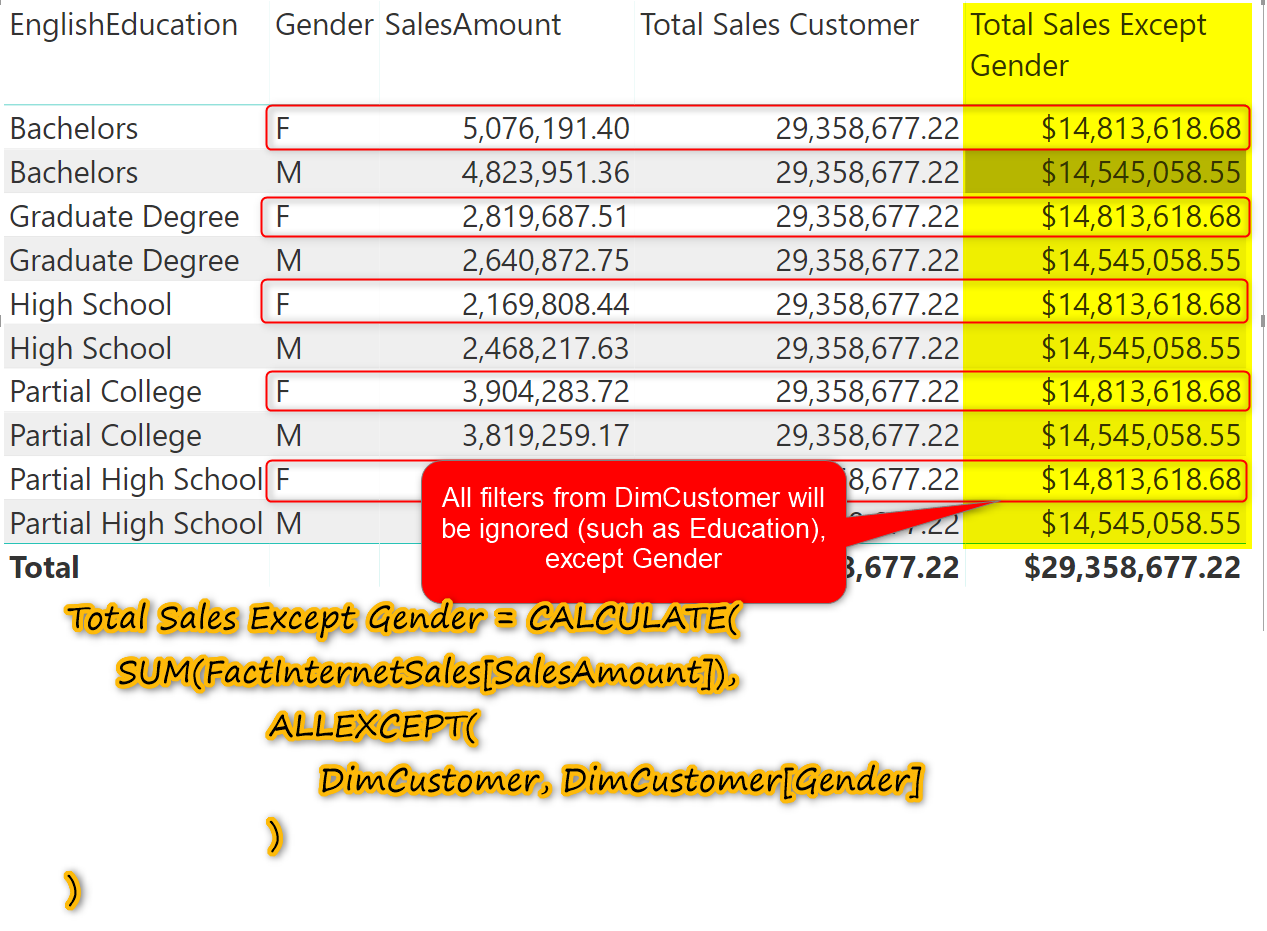 Because the functionality of ALL seems like magic, so I titled this article as; Now you see me! use cases of all function in DAX and Power BI. ALL function, despite the fact that looks basic and elementary, it is one of the most important and commonly used functions in DAX. the main functionality of ALL is to ignore filters coming from one table. You can use the ALL function inside other functions as the table input, and there are many examples such as percentage calculation, and overwriting the interactions of measures that can be done simply using ALL function. If you haven’t used this function before, consider it from now on seriously. and if you have used it, put some of your use case scenarios in the comment below to share with other readers.

9 thoughts on “Now You See Me! Use cases of ALL DAX Function in Power BI”