I thought it might be fun to try something a little different with this blog and use a combination of bookmarks with a little DAX magic to come up with a game that plays a hand of Blackjack.  Power BI and DAX are not the ideal engine to build a game of Blackjack with, but it was an interesting challenge and I thought I would share my approach that takes advantage of quite a few novel techniques. 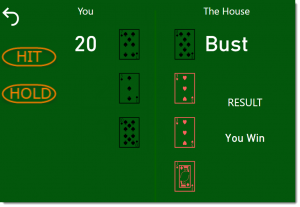 First of all, let’s look at the finished result.  The PBIX file allows you to play a single hand that involves you playing the House.  The first view of the table shows the first card for both you and the house.  You can then click the hit button to deal new cards until you decide to hold (or go bust), at which point the house cards are revealed with a dynamic message that shows if you won or lost.  There is no mechanism to bet or play additional hands.  The game is dynamic enough to understand if you win, lose or draw based on your decision on when to hold. 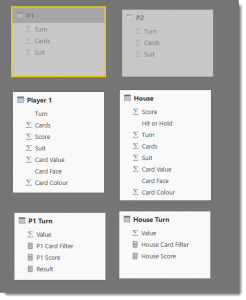 The P1 and P2 data-tables at the top are effectively the shuffled cards as dealt in order of ‘Turn’.  They both have the same pattern and structure with 10 rows and three columns.  The reason there are two tables is so we can have a random set of cards for Player 1 (the P1 data-table) and a different set of random cards for the House (P2).

My first stab at creating a random number in Power Query ended up providing the same number for each row, so I passed the value of the previous step as a way to force Power Query to generate a new value for each row

The M code for the P1 table starts by generating a list of numbers {1..10} which is then converted to a table with two extra columns added containing the random numbers needed for Card (1 to 13) and Suit (1 to 4).

The M code for the P2 table

While the P2 table is a copy of P1, it generates a different set of random numbers.

The P1 and P2 tables are hidden from the final model and are used as the basis for the next two tables.

The DAX fun begins in the next data-table.

For Player 1, we generate a data-table based on the P1 table from the previous step.  There will be 1-row per turn and a series of columns that help determine if the player wins the game.

The Turn, Cards and Suit columns are derived from the P1 table unchanged, but four new columns are added.  No rows are added or filtered.

Firstly the ‘Card Value’ column converts the ‘Cards’ column back to the numeric value associated with the card.  Ace = 1, 2 = 2…. J, Q & K all equal 10.  This value is used to determine your score to compare in the game.   While an Ace card can represent two possible values (1 or 11), this is handled later in the code that generates the ‘Score’ column.

The ‘Card Face’ column uses the UNICHAR function to combine both the ‘Cards’ and ‘Suit’ columns to a Unicode value that represents one of the 52 playing cards.

Then a ‘Card Colour’ column is generated to return a 1 or 0 that will be used by conditional formatting to set the font to be red for heart and diamond suits, and black for club and spade suits.

Finally, a ‘Score’ column is added that performs a cumulative sum over the ‘Card Value’ column based on incrementing turns.  A nested variable scope is introduced to handle the scenario whereby an Ace card can have a numeric value of either 1 or 11.  The logic first tests to see if there has been an Ace in any of the previous turns and counts the Aces so far.  The B1 and B2 variables then provide the two possible best scores based on the combination of Aces dealt to this point.  The SWITCH statement analyses both values stored in the B1 and B2 variables to determine the best possible score under 21 to return.  If both B1 and B2 are over 21, then a value of 99 is returned which represents a bust.

The last of the three data-tables in the model used to control Player 1 is the ‘P1 Turn’ data-table.  This is simply a 10-row single column table with numbers 1 through 10.  The purpose of this table is to use in conjunction with a slicer that will help keep track of what turn Player 1 is up to.  A series of 5 bookmarks will be used to snapshot a slicer selected in 5 different states.  A series of bookmarks will be taken with this slicer having a different value selected which is how the game can keep track of the progress through the game.

A [P1 Card Filter] calculated measure keeps track of the selected value over the above slicer which is used as a filter on the table-visual that is used to reveal cards for Player 1.

A [P1 Score] calculated measure uses the [P1 Card Fitler] measure to determine the current score for Player 1 depending on how many cards they have had dealt.

Both the [P1 Card Filter] and [P1 Score] calculated measures have equivalent versions to handle the scoring for the House, although are slightly different in that the house only has 1 hand, or shows their final state.

This table is similar to the ‘Player 1’ table in that it carries forward the three columns (Turn, Cards & Score) from the ‘P2’ table generated in Power Query.  The difference is that a new column called ‘Hit or Hold’ is added to control the rule that says the House must keep dealing until they hit 17.  Once the cumulative ‘Score’ is at 17 or greater the house will stop dealing.

The final RETURN statement filters the overall data-table so it only has as many rows as the first hold – which could be a bust score.

The cards can only be in 2 states for the House.  State 1 is that only the first card is showing, while the other state is that all cards are showing.

There are two report pages.  The first is simply a welcome screen with a button linked to a bookmark that takes you to the second report page where the game takes place. 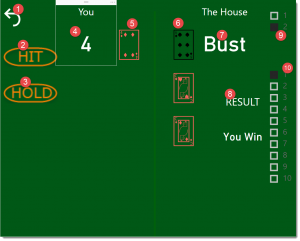 The game is dynamic enough that with the same set of cards, depending on how many times the Player hits and then holds, they can win, lose or draw.

There is no concept of betting and it’s only good enough for one hand.  It does showcase a variety of features available in Power BI.  The refresh button needs to be clicked to generate a new set of cards using the randomiser in Power Query.  Unfortunately the “Publish to Web” feature offers no ability to randomise the cards, so you end up playing the same hand over and over.