The latest addition to my recent series of DAX based games is the classic Minesweeper game.  This is the game where you are presented with a 9 x 9 matrix of squares.  There are 10 hidden mines and you can either step on a square or place a flag where you think there might be a mine.  If you are lucky enough not to step on a square that contains a mine, you will get clues that help you identify where the mines are.

Once again, graphics and UI was provided by Mike Cairo over at PowerBI.Tips and make a huge difference to the look and feel of the game.  This is not just true of games like this.  If you want to make your business reports look more professional, it’s well worth heading over to PowerBI.Tips and checking out the fantastic pre-built layouts that you can download and try out with your data.

I recognised early on with this game that the trickiest challenge would be deciding what squares to reveal.  I opted for the native Matrix visual to control the squares.  I forced the rows/columns to be 9 x 9 by creating a table with those numbers. The next thing was to create 81 tables to keep track of squares the player has either stepped on or flagged as a mine.   Each table represents a square on the matrix and carries a single column/ two-row table with a 1 or a 2.  A selection of 1 would denote a player has stepped on the square that table represents, while a 2 shows a flag has been placed.

Then I created 81 slicers over the top of the 81 tables that would be hidden.  Each slicer would be controlled by 2 bookmarks – meaning 162 bookmarks for flag/step control.  One bookmark for stepping on the square, while the other for flagging.

SVG images were generated for the squares for the various states.  These were all the same size, so once added to the matrix, I could begin to fit the invisible buttons to the board.  Care was taken to ensure the pixel layout was as close a fit as possible to the matrix loaded with images. 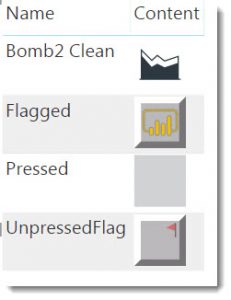 There are two invisible buttons over each square on the board.  The first covers the whole square (approx 75 x 75 pixels) and has an action linked to the bookmark that sets the corresponding slicer to equal 1.  This records the player has “stepped” on the square.

A second smaller bookmark covers the top righthand corner of the button (40 x 40 pixels) and has an action linked to the bookmark that sets the corresponding slicer to equal 2.  This records the player has “flagged” the square as a mine.

There is no concept of a left-click/right-click option in Power BI visuals, so decided this wasn’t a terrible way to give the player the two options needed for gameplay.

There are a lot of objects needed for a 9×9 matrix and currently no way to script.  This is why there is no option to chose a more advanced version of the game that includes more rows and columns.

The game logic is all contained in the [Super Measure] calculated measure.  This is the only measure that is added to the game matrix and will output the appropriate image depending on its position on the matrix taking into account the state of the 81 tables.  At the start of the game, none of the tables has a selection made so the initial output for every square is the “Unpressed” SVG. 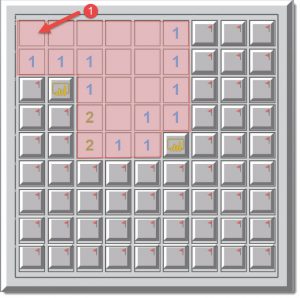 This means the calculated measure needs a way to understand if “unpressed” squares on the board have a direct relationship with a blank square that has been pressed.  There can be multiple regions on any given game board and these can have quite irregular shapes.  I considered using nested iterators to try and work out on the fly but settled on a calculated column based approach to identify the regions.

A side note at this point is the 10 random locations of the mines are generated in Power Query.  This is done in Power Query rather than DAX so the 10 locations are set at the start and cannot change.  If this logic were in DAX the location of the mines would jump every time a filter is changed – which is not ideal.  The mines are stored in a table called ‘Mines’.

The co-ordinates used to identify each square starts with 1 for the top right square and then increments left to right and top to bottom. 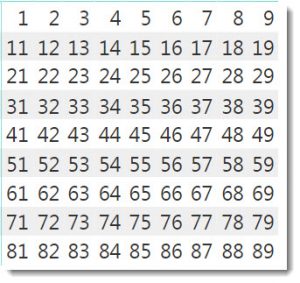 You may notice there are no squares for 10, 20, 30 etc.  I skipped these to make it easier for me to keep track of proximity values.  So for any given square I could apply the following filter adjustments to find its immediate neighbours in each direction.

In fact, I created a table with these numbers that I incorporate into the game logic to help keep the code tidy when needing to filter/identify nearby squares.

The DAX for the calculated ‘Game logic ‘ table is as follows

This creates a base table with 5 columns to determine the row and column for each square, along with info showing if it is a Mine square, or carries a clue in the form of a number.

The badly named T1 variable adds the logic to show if the cell is a mine, while the T2 variable creates a filtered table on the fly using the [Periphery] logic to count the number of rows that happen to be a mine. 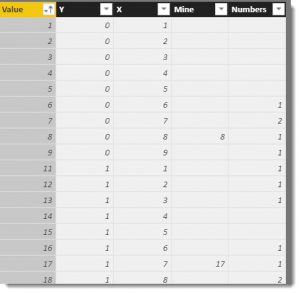 From here, I use a series of columns, starting with a base set to help determine the regions of blank squares.  The trick is to make every square in the region have the same value.  I decided it might be easiest to take whatever the minimum coordinate is for the region and have that propagate out (like a virus!).

First I added a [Base Region] calculated column that only carries a value if the square is not a mine or clue square.

When plotted on a matrix, you can see there are two distinct regions, but they have nothing in common at this point. 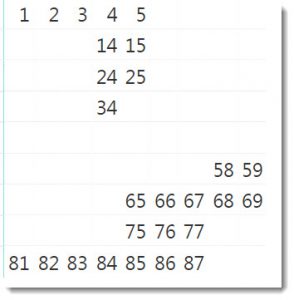 Now for the magic. The next column looks at every value in the same horizontal row and updates to be the minimum value for any value in that row.  This is smart enough to understand when unrelated regions share the same row.

When this column is applied to the matrix we see the following.  Note how every row now carries the value that was the minimum value for that row. 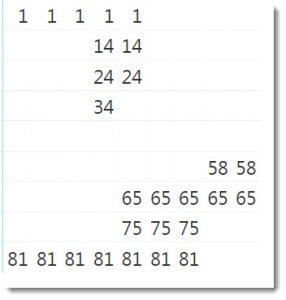 Step 2 is to take the same calculated column approach but apply vertically.  This calculation is practicially identical to the above, only it uses the [Y] axis. 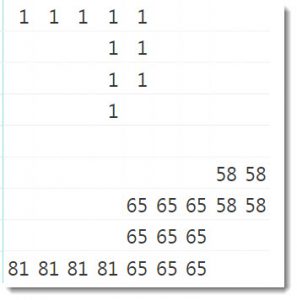 I repeat the same technique applying horizontally then vertically.  Each column builds on the results of the last columns. 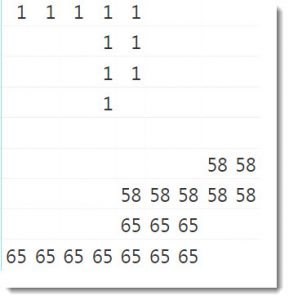 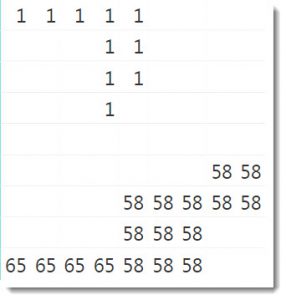 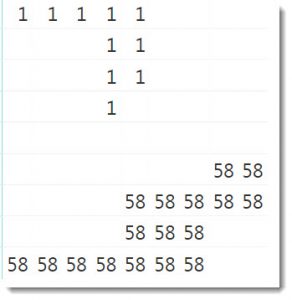 I can keep this going as many times as I need but for a 9×9 grid, I suspect only 3 passes of pairs are needed.

Once the numbers have been established, I rank the regions based on their lowest number and convert the ranking (1,2 or 3) to an alpha character (A, B or C).  I do this to make it easier for me to distinqish a region square from a numberic clue square.

The final column combines mines, clues and region squares into a single column that when added to the matrix looks like: 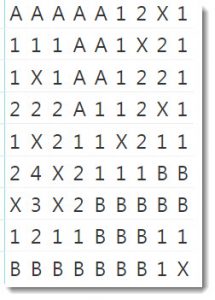 The last piece of the puzzle is to create a measure to control what is displayed on the game matrix.

This particular block of code probably deserves a blog in its own right.  The idea is to establish what SVG image the measure needs to output for the square.  There is a SWITCH statement near the end that applies some tests such as :

So variables prior to the final SWITCH statement are designed to make it easier to apply the above tests.

The last objects are measures that show progress on a panel on the left-hand side. These are managed by a [Flags Placed] and [Result] calculated measure.

All in all, it looks pretty good.  The grid seems to have some alignment issues that surface when the first move has been played but then goes away again once a second move has been made.  I’m not sure if this is to do with the measure drawing SVG images to the matrix.

I hope you like the game and find something interesting in the DAX and/or the approach.  Feel free to reach out on Twitter, or comment here if you would like clarification or more detail on any aspect of the game.

6 thoughts on “Fun with DAX – Minesweeper”