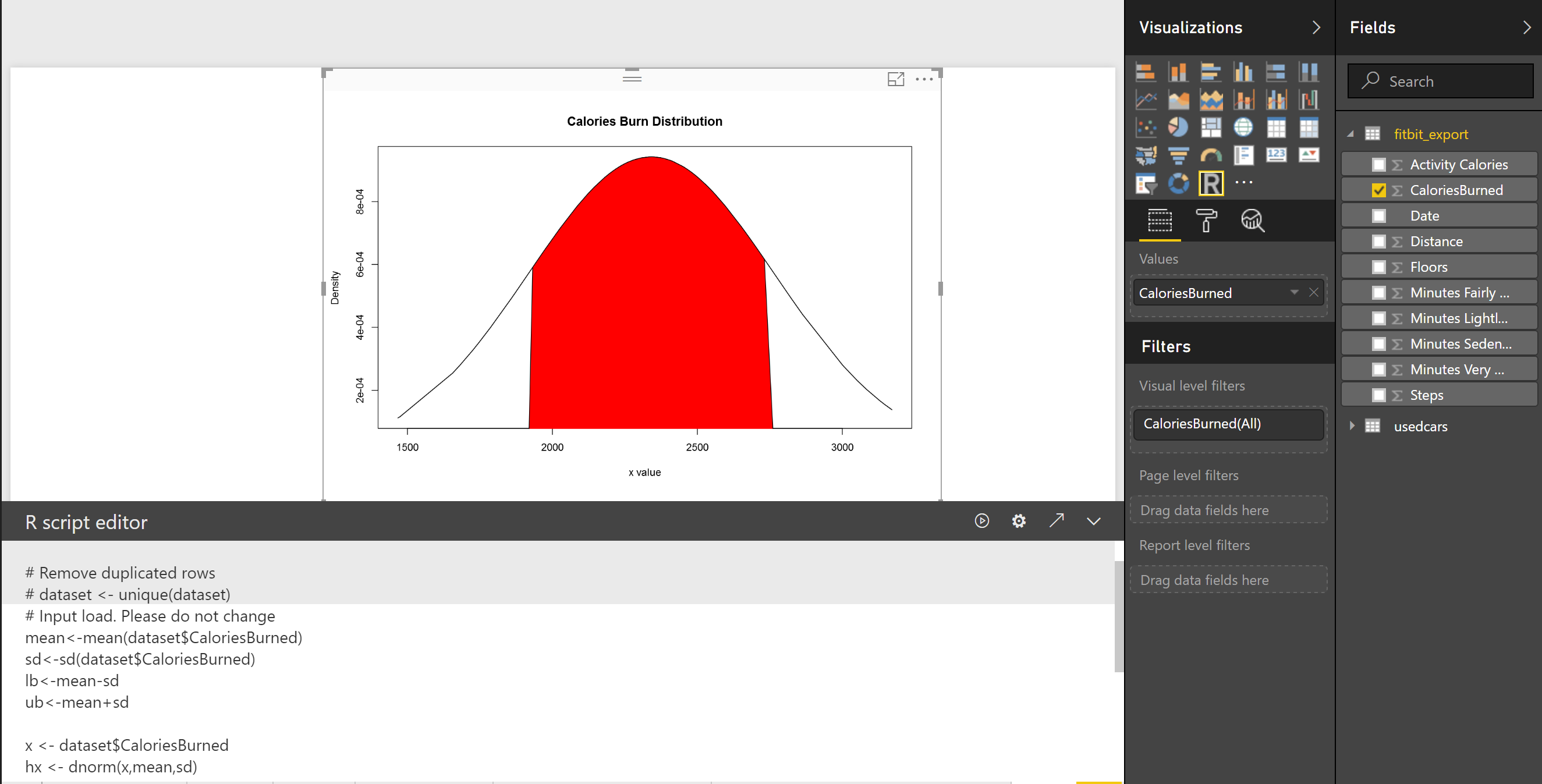 In the Part 1 I have explained some of the main statistics measure such as Minimum, Maximum, Median, Mean, First Quantile, and Third Quantile. Also, I have show how to draw them in Power BI, using R codes. (we have Boxplot as a custom visual in power BI see :https://powerbi.microsoft.com/en-us/blog/visual-awesomeness-unlocked-box-and-whisker-plots/ ). However, to see the data distribution another way is to draw a histogram or normal curve.  The spread of the numeric variable can be check by the histogram chart. Histogram uses any number of bins of an identical width. Below picture shows the data distribution for my Fitbit data (Floors, Calories Burned, and Steps). 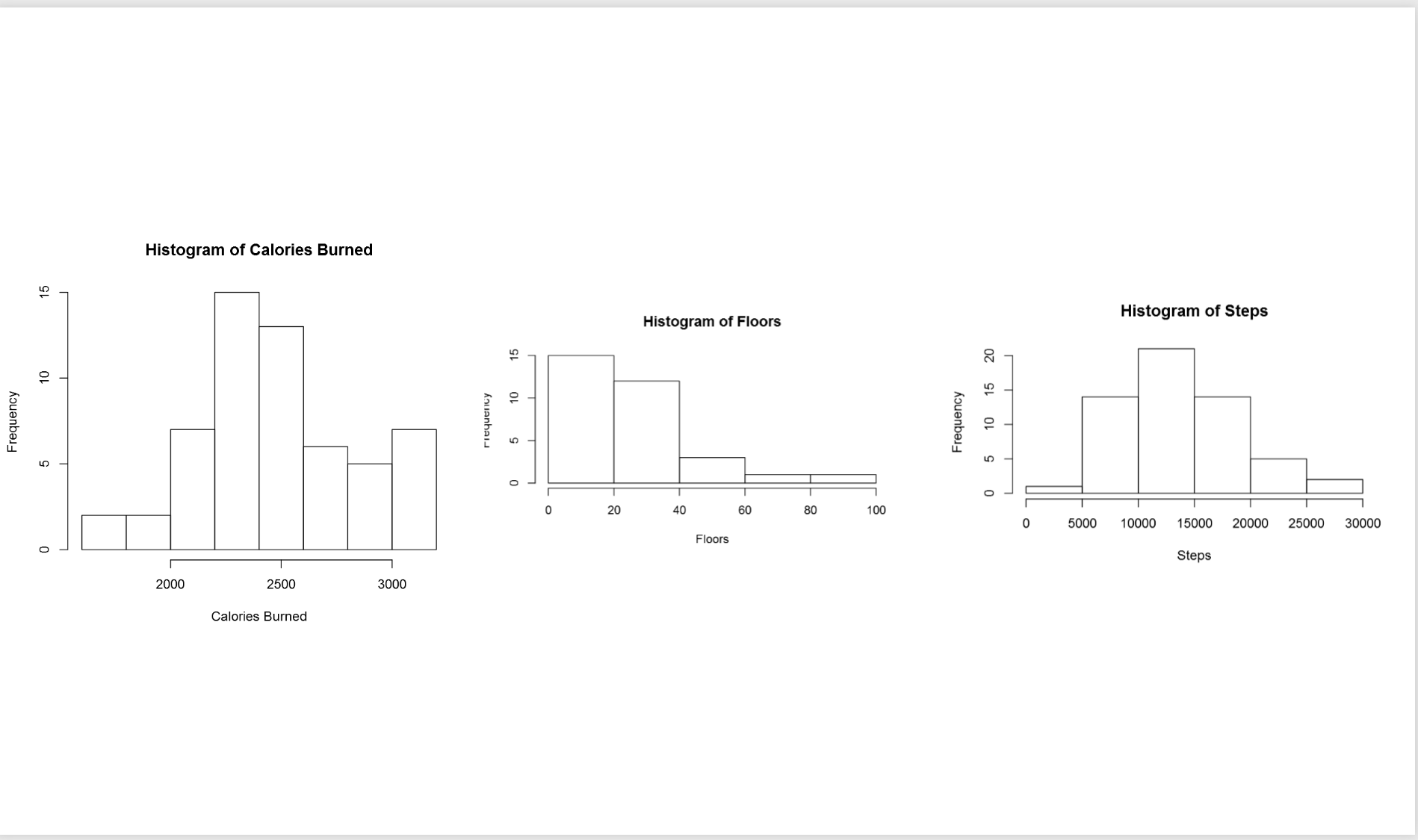 to create a histogram chart,  I wrote blew R code. 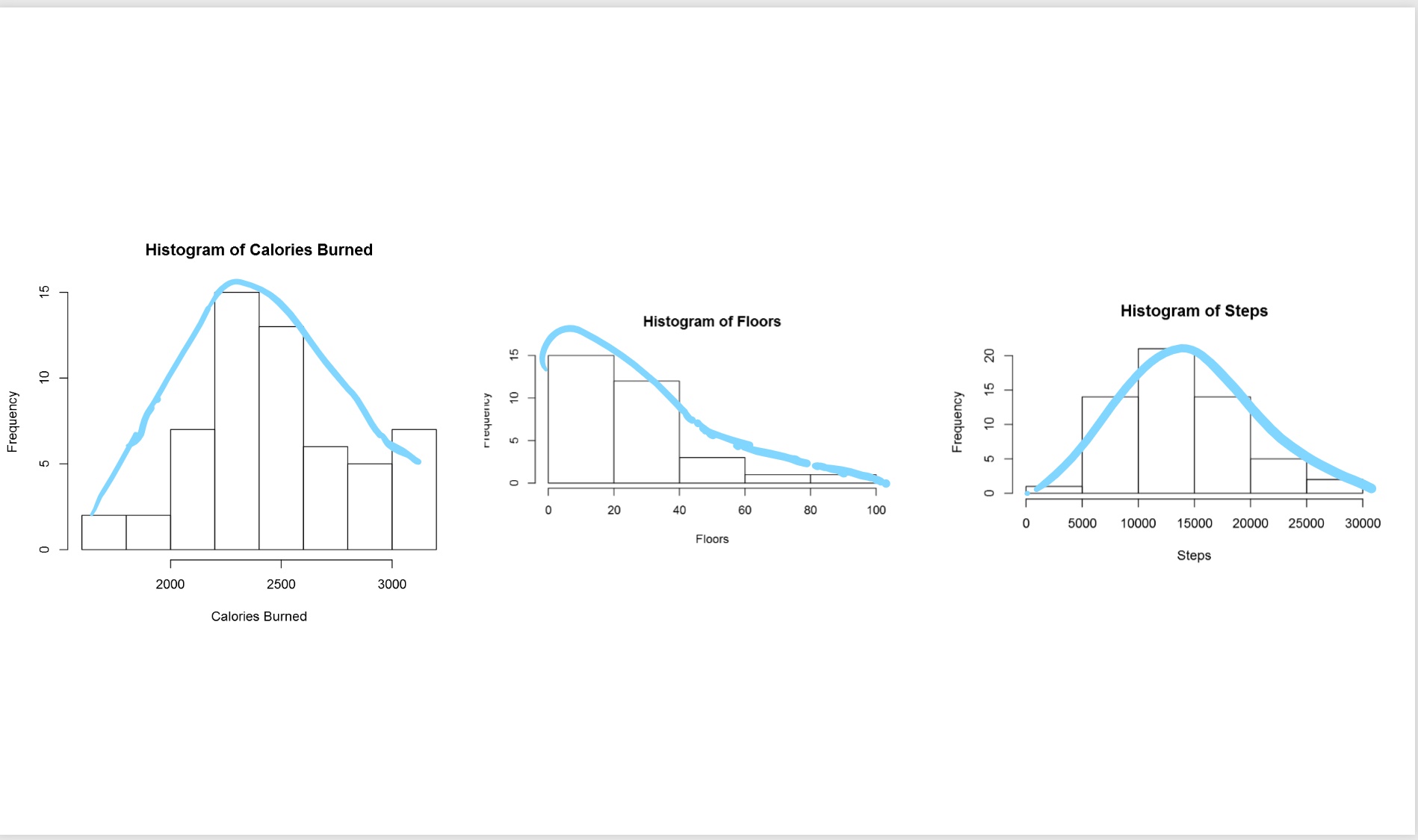 The centre of the data is measured by Mean value, which is the data average. Spread of data  can be measured by Standard deviation.

So What is Standard Deviation! Standard deviation can be calculated from Variance.   Variance is :”the average of the squared differences between each value and the mean value”[1] in other word to calculate the variance, for each point of data we call (Xi) we should find its distance from mean value (μ). to calculate distance we follow the formula as :

the distance between each element can be calculate by (Xi-μ)^2 (Number 1 in above Formula). Then for each point we have to calculate this distance and find the average. So we have summation of (Xi-μ)^2 for all the points and then divided by number of the points (n).  σ^2 is variance of data. Variance or Var(X) is the distance of all point from the mean value. The Standard Deviation is sqrt of Var(X). that is σ. So if data is so distributed and has more distance from Mean value then we have bigger Standard Deviation.

To draw normal curve in Power BI I wrote the blow codes. First, I calculate the Average and Standard Deviation as

Then I used the “dnorm” function to create a norm curve as below:

Then the following picture will be shown as below 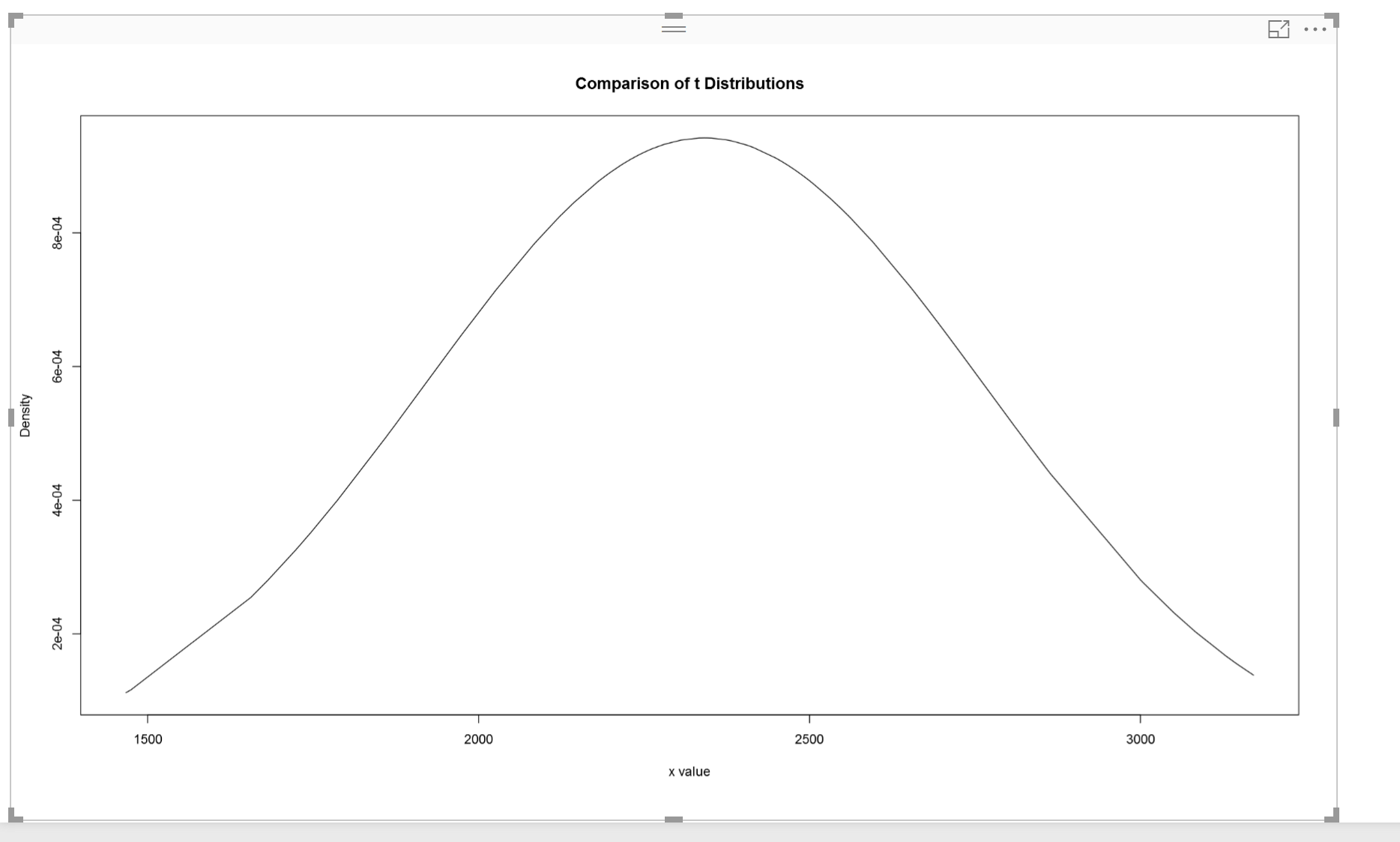 According to [1], the  68-95-99.7 rule states that 68 percent of the values in a normal distribution fall  within one sd of the mean, while 95 percent and 99.7 percent  of the values fall within two and three standard deviations, respectively[1].

also we can specify the 98% of data distribution by writing the below code:

the result will be as below 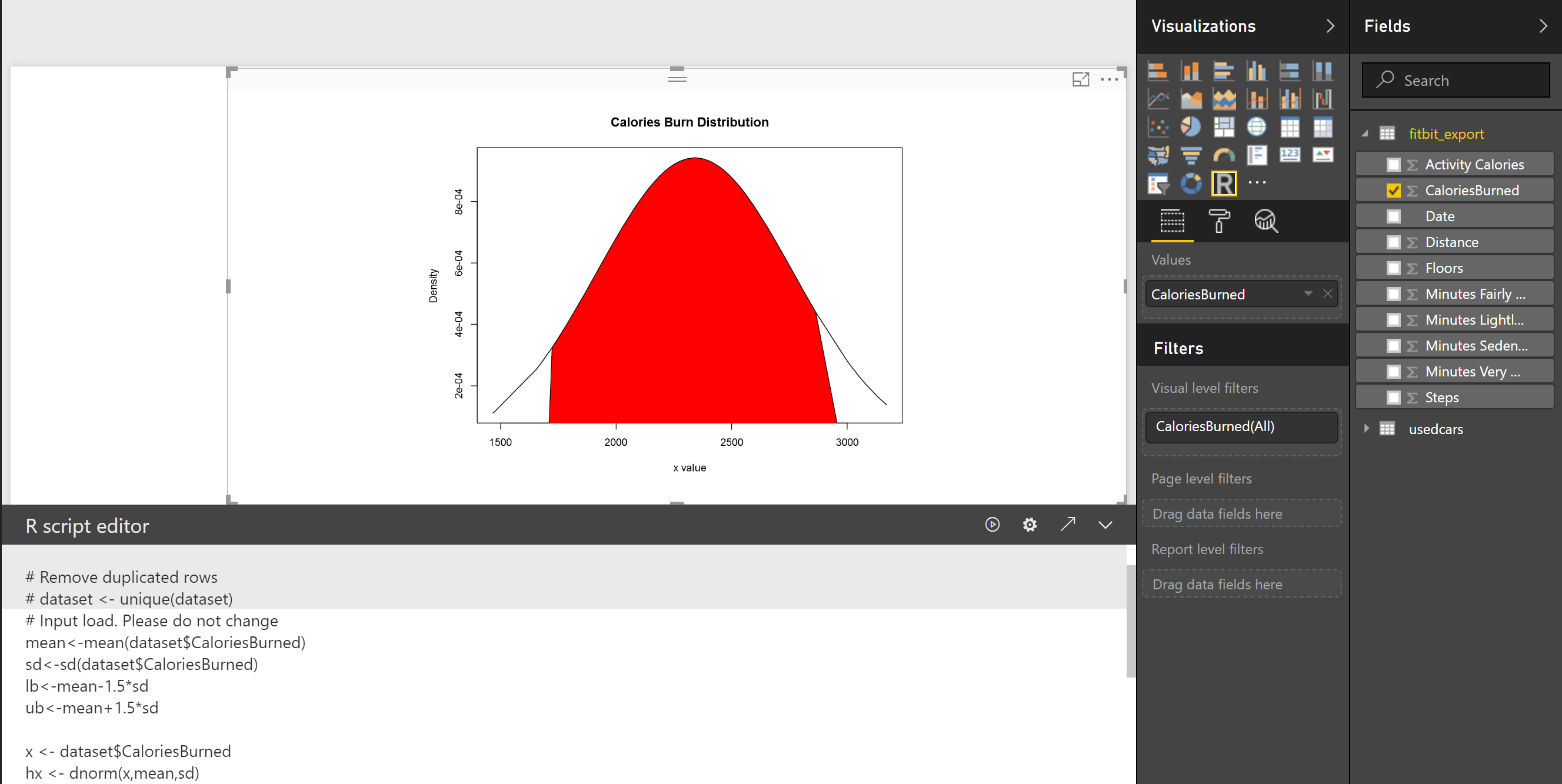